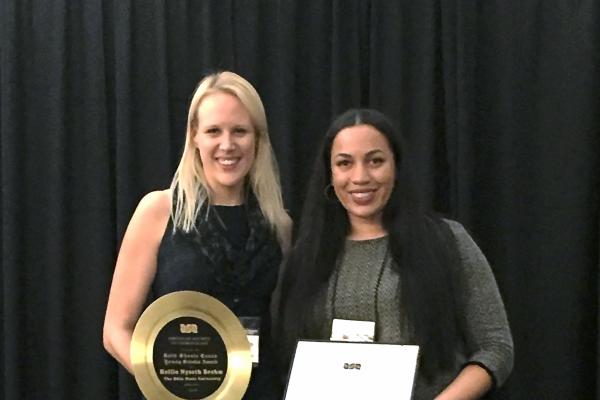 Assistant Professor Dr. Hollie Nyseth Brehm recently received the Ruth Shonle Cavan Young Scholar Award at the American Society of Criminology annual conference held in Atlanta, Georgia from November 14-17, 2018. This prestigious award is given by the American Society of Criminology to one individual per year - read the news release from the Criminologist on Dr. Hollie Nyseth Brehm below!

"Hollie Nyseth Brehm is an assistant professor of sociology at The Ohio State University. Her scholarship examines why the crime of genocide occurs and how countries rebuild in the aftermath. She has published more than 20 articles examining genocide and human rights, with recent articles appearing in Criminology, Social Problems, and Social Forces. Her current research is funded by two grants from the National Science Foundation—one that examines Rwanda’s post-genocide gacaca courts and another that addresses prisoner reentry and reintegration after genocide. She has given a TEDx talk on eradicating genocide and has received the International Association of Genocide Scholars’ Emerging Scholar Prize. Nyseth Brehm serves on a U.S. government atrocity prevention task force and works with Rwanda’s National Commission for the Fight Against Genocide and the Institute of Research and Dialogue for Peace. She is also on the board of the International Association of Genocide Scholars, I-Activism (which helps build schools in refugee camps), and Refuge, a nonpro t she and her students founded that pairs adolescent refugees with a college student mentor in a college-readiness program. At Ohio State, Nyseth Brehm teaches classes on genocide, terrorism, and violence, and she created a study abroad program to bring Ohio State students to Rwanda each summer. She has been awarded both the college’s and the university’s highest teaching honors, and she has received the college’s mentoring award for her avid support of undergraduate research."